NFL schedule 2019 has officially been released and it’s loaded with high-profile games right out of the gate in Week 1. But beyond that, the full schedule for Monday Night Football is worth talking about, as quite a few of the games provide interesting headlines. From rivalries to intriguing storylines that add drama, many of the weeks offer strong matchups in primetime.

We’re going to take a look at the full Monday Night Football schedule for the season and then breakdown some of the best matchups and talking points. A number of high profile young quarterbacks will be featured on MNF this season, along with signal-callers on their way to Canton in the future.

As we’ve seen in previous seasons, Week 1 offers two games on Monday night, and the first is a date between Deshaun Watson’s Houston Texans and Drew Brees’ New Orleans Saints. Let’s dive into the full schedule, which was revealed by the NFL. 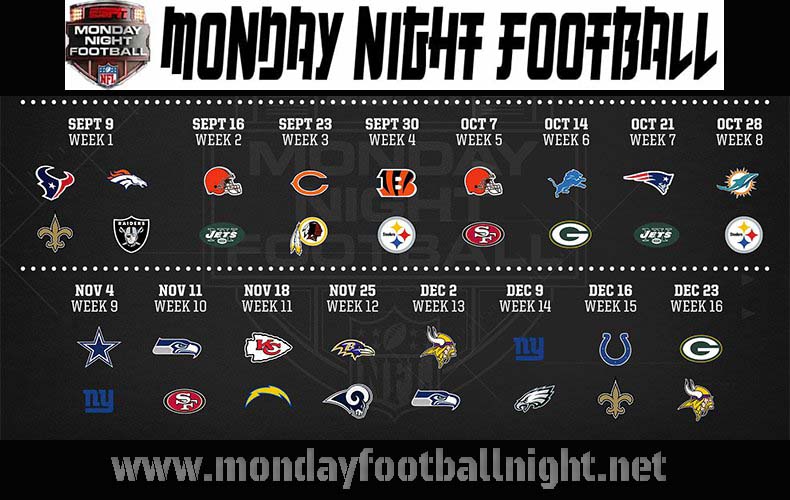 Week 1 begins with two high-octane offenses and exceptional quarterbacks in Watson and Brees. The game should feature plenty of points, and has the potential to be one of the best matchups of the opening week. The night wraps up with a rivalry game on the West Coast between the Denver Broncos and Oakland Raiders which begins the likely final season in the Bay Area for Jon Gruden’s team.

The matchup in Week 2 between Baker Mayfield and Sam Darnold should be a great one, as both the Cleveland Browns and New York Jets look like teams ready to turn the corner. Many believe the Browns will win the division this year, and NFL fans will get an up-close look at them early on.

The Browns are also on Monday Night Football three weeks later against Jimmy Garoppolo and the San Francisco 49ers, who’ll host two games on Monday night this season. That game should also be a great matchup, but the schedule across the board on primetime looks strong following Wednesday’s release.